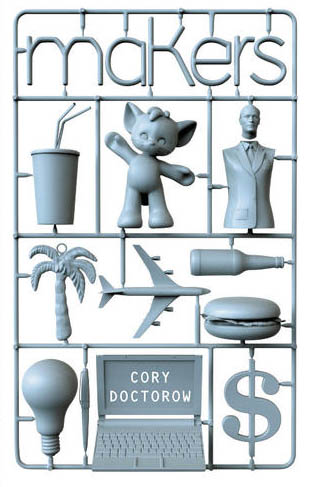 A few months ago, I went to Forbidden Planet on Shaftesbury Avenue to get Cory Doctorow’s autograph on a copy of his latest book Makers, which I bought at the venue.

Makers marked (yes, pun intended!), a first for me as far as reading a science fiction book set in the web 2.0+ technological world is concerned (I’m not even sure there are that many books that belong to the genre in the first place, correct me if I’m wrong – emphasis on web 2.0+), and for the most part I really enjoyed it. Being as immersed as Doctorow is in technology, gaming, design and culture (largely thanks to Boing Boing), it was refreshing to read a story about people who really enjoyed being geeks. It was also the first time I saw terms like ‘teh awesome’ bandied about in a book as naturally as if they were part of the Oxford English Dictionary, which I am sure in due course they will be, and I felt very excited even as I read it, to be part of what I think is a growing band of people who actually understands these words.

Makers is the story of Perry and Lester, two creators who make things out of all sorts of junk – RFID tags that glow when you press a remote control so you can find stuff like keys that you invariably lose, seashell robots that make toast, and so on and so forth. Suzanne Church is a journalist-turned-blogger who documents their technological adventures, amassing a massive fan base in the process. The novel chronicles the boom-bust of what to me was reminiscent of the early 2000’s dot com era, through the changing fortunes of Kodacell, a company formed by the merger of Kodak and Duracell and owned by Landon Kettlewell, which employs Perry and Lester. There is also a subtle (and expected) sub-plot that follows the slow death of newspaper journalism – remember that it is set some time in the future and that it is fiction, all ye lovers of the press!

Doctorow is clearly talented and has an excellent command over the subject matter, but I felt that the story started dragging towards the end, with the relationships between the characters being overly descriptive and emotional. Agreed technology and emotion can go hand in hand – indeed it is the excitement about technology that drives the larger chunk of the story – but getting that balance just right is very difficult. I’d still recommend the book – it is certainly entertaining and well-written.

For people who have the stamina, Tor.com is publishing the whole story in parts here – just a couple more posts to go to complete the series (they started publishing it in July last year).