I’m actually glad I’ve found out the exact term for using multiple media forms at the same time – watching TV, surfing the internet, and checking your phone, for example: it’s called ‘media-stacking’, and is “most prevalent among 18 to 24-year-olds, as 76% of respondents in that age group regularly browse the Internet while watching television”. I know plenty of people who are outside that age group who media-stack though. It’s definitely a disease that spreads 😉

Scott’s Vocab in the New York Times has more here. 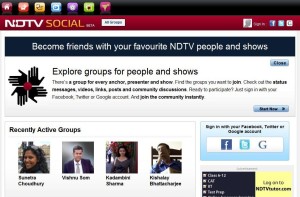 Indian news channel NDTV has launched an interesting website that aims to make themselves more social. Called NDTV Social, it has groups for every news anchor on the channel, and their popular news programmes, and readers can, Facebook-style, become fans of either or both and initiate discussions with the news anchors, many of whom are very popular in India and have their own Twitter accounts. It is integrated with Facebook, Twitter and Google. There doesn’t seem to be much of a take-up at the moment – the community seems fairly small. But I think it is an interesting model to look at. Facebook fan pages do the same thing to a large extent, but this website allows NDTV to become the media owner, rather than a third party site like Facebook. It’s certainly a new model – I can’t think of any other news site that offers this kind of interaction. I’m not sure if it will be successful, but it certainly looks like NDTV is, at the very least, evolving with the changing times.