A few weeks ago I was at the Female Futures Forum hosted by the Future Laboratory. It was based on their latest research looking at female entrepreneurialism and innovation. I’d been interviewed by them as part of their research a while back, so it was good to see the final output presented.

The research presentation covered a few key facts about women in business, which may be familiar to many but should become familiar to everyone. They bear repeating; here are some of them:

The presentation also noted how many brands are now paying attention to women and their place in the world. Some campaigns highlighted were UN Women Egypt’s print ads about the gender split in the workforce, GE’s brilliant campaign showcasing a world where female scientists are treated like celebrities, and the Nike ad featuring female Arab athletes. 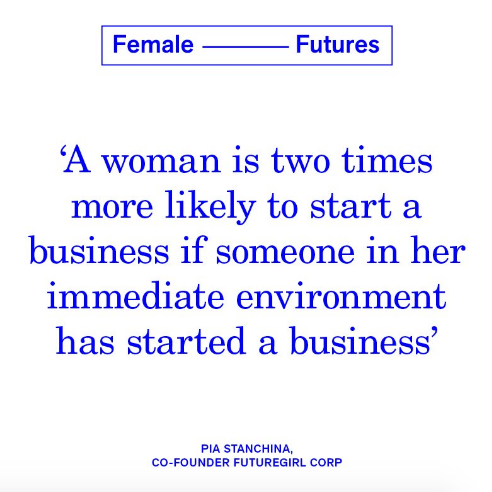 However not enough companies are putting their money where their mouth is when it comes to actually hiring enough women, or promoting them. As Cindy Gallop says:

We are seeing virtually zero change. Stop talking about it – start doing it. I don’t want to see nice words and fancy ads. I want to see THIS. Put your money where your mouth is.

The second part of the event showcased interviews with female Gen Z entrepreneurs who believe, amongst many other things, that there is place for more than one woman at the top, and that it is only by taking care of oneself that a person can create a business that succeeds (the latter quote, and image below, by 22-year-old Phoebe Gormley of Gormley & Gamble).

The last session of the day was a panel discussion featuring Cilla Snowball, Chair of the Women’s Business Council and Group Chairman and CEO of AMV BBDO, Dr Mara Harvey, head of UBS Unique and a senior manager of UBS Wealth Management, Sara Shahvisi, director of programmes at Fearless Futures, and Sam Baker, co-founder of The Pool, moderated by Tracey Follows, Chief Strategy & Innovation Officer at the Future Laboratory.

Dr. Mara Harvey spoke about the challenges she faced in setting up UBS Unique, a division focussing on female clients, in the heavily male-dominated world of finance. She grappled with something as simple as naming the programme because she knew it needed to be taken seriously by men as much as women (and hence rejected the name Athena!). The goal of the programme is to educate at least 1 million women in finance.

Sam Baker was candid and spoke with honesty about her journey getting funding for The Pool. In her experience, men prefer to hear made up numbers as they want to invest in what they consider ambitious projects, whether or not they made sense. Sam narrated how she went to a VC meeting with her (female) communications director and was told they needed a man on the team ‘because it would look better’. She also narrated how she was constantly asked to justify her lifestyle business as a woman while men who had similar businesses were never asked to, despite by their own admission being less ambitious than her.

Sara Shahvisi said that educating children about things like gender bias should start in school – 21 years old is way too late as habits are already firmly set by then. She also spoke about how women should be compensated for the amount of time they spend caring for other people as they take the bulk of the responsibility for a fruitful society. She highlighted the need to talk about diversity of all sorts – not just gender but race, colour etc.; that the definition of diversity needs to be broader.

Cilla Snowball focussed on the need to make men as responsible for women’s success as women themselves. For example, the analogy about women needing to extend the ladder down to help other women up should apply to men as well. Men should also be celebrated for supporting women as much as women are, so that more men do it. She also made an important point about the need for younger female role models – the older women who have decades of experience are important to showcase but may not be relatable for a 12-15 year old.

All in all, a really inspiring morning. Huge thanks to Tracey Follows for the invite!