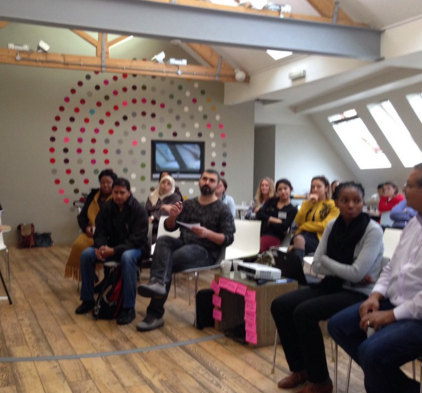 Yesterday I was at a Royal Academy of Engineering unconference, organized by Source Institute. Other participants included a number of academic engineers from Turkey, Egypt and South Africa. The unconference itself was part of a 2-week programme designed to introduce these engineers to the world of commercialization, technology entrepreneurship, and design, so that they might be able to implement some of the startup thinking that we are so familiar with here in London on their return back home.

It was a fascinating afternoon – some of the sessions focussed on basic startup issues: hiring, team management, funding. But I thought one particular session on technology opportunities in developing markets, and whether people there ‘had a responsibility’ to their countries, was very interesting indeed.

The situation discussed was that of a GMO technology at the University of Cape Town, where a multi-national company once offered the team that came up with it half a million dollars. The actual valuation of the technology was $12 million. The local team were understandably miffed at the disparity, and obtained the advice of an independent research professor at a US university, who validated their desire not to take the offer, saying that multi-national companies do this to technology companies from the so-called emerging markets very often. This, of course, is basic hoodwinking 101, in the guise of ‘business’.

Unsurprisingly, as I was thinking about how the situation smacked of colonialism, the participants themselves brought up the issue. In particular, they argued that technology is a relatively new resource. It is one thing to think of a situation centuries ago, when the Empire traded in precious stones and resources with the colonies at terms that were entirely favourable to them, something else altogether to assume that that sort of transaction can have a place in the modern age.

Colonial thinking has no place in a world where business, powered by technology, is meant to be transparent, and the playing field fair. If someone values a business for an amount that seems unjustified, it needs to be qualified. The assumption that questions won’t be asked and answers not deemed necessary is laughable, which is what happened in this case. The emerging markets have some of the best minds working on the some of the most interesting problems the world faces today. To not give them that credit when it comes to the brass tacks of signing a contract, never mind the posturing, is to the disadvantage of everyone.

As people working in technology, it’s high time we all commit to respecting talent over an invisible social hierarchy. Going back to the original question posed in the session: do technologists from developing countries ‘have a responsibility’ to their countries to stay away from being hoodwinked, from selling their work for a below-market-value price? Let me put it this way: how about we agree that we are all part of the same stage? The onus isn’t and shouldn’t be on them – the responsibility is all of ours to engage in good business practices for the benefit of all.

Thank you to Salim Virani and Bart Doorneweert for having me there.