I thought I’d write up some of the interesting stuff that was mentioned at the publicity party for the Webby Awards at the ICA earlier tonight, before I forgot. The event’s focus were the five-minute talks by people who had something to do with the web in one way or another. That’s my description, but they were a truly diverse bunch by personality, so technically it was just a bunch of cool people talking about cool stuff.

The event was compered by Nicolas Roope from Poke, whose blog I read quite a bit. Very entertaining guy – despite his claims that most of the speakers’ introductions were ‘taken off the internet’, he made the audience and the speakers laugh quite a bit. First off was Alfie Dennen from Moblog, who spoke about the XDRTB.org project that I noticed online when it was live. It was a project to spread awareness of tuberculosis, a wish of TED winner James Nachtwey, that was a GPS-enabled version of a treasure hunt that had clues spread across blogs. He also mentioned BritGlyph, a project that Moblog is working on that is a geoglyph for the UK. Think of it as the modern version of the crop circle pi (or at least I do!). It’s something I hope to participate in later this week.
Next up was Miltos Manetas from Neen. I was really surprised I hadn’t heard of him before tonight – essentially an artist who started Neen for ‘Neenstars – an undefined generation of visual artists’. He seems incredibly interesting, and spoke about Jello Time, Harm van del Dorpen’s Diamond (which ‘spies on you’, as he says!), and JacksonPollock.org, among other things.
Then there was Tom Loosemore from Channel 4’s 4ip. Tom’s core thesis was the growing relevancy of the web and crowdsourcing. His case in point was the Norwich City football site, started in 3 and a half weeks at a cost of 20p (or so he said), which had a huge amount of participation and views on launch (I forget the numbers). This in turn led to similar sites for Colchester United and Ipswich Town.
Matt Biddulph of Dopplr spoke about..well, Dopplr. OK, I’m being a bit mean – he spoke about the growing tribe of travellers and how sharing of travel experiences is the next big thing, while also mentioning Brave New World and Buckminster Fuller – ideas I felt he could have expanded upon. Perhaps 5 minutes was not enough for him, but I didn’t think he made much of an impact. Maybe I expected too much – I’d heard a lot about him but never seen him speak before.
Marcus Fairs, editor of well-known design magazine Dezeen, followed. For the entire 5 minutes he had at his disposal, he went on about Lightbulbs Direct and how there was actually a site where you can buy every kind of *lightbulb* you need. That doesn’t sound very cool when I write it, but if you were there, you’d have been in splits at the way he delivered his talk!
Sam Ball of Lean Mean Fighting Machine presented a great video (that I can’t find on YouTube), and said : “don’t worry about change, worry about motivation and inspiration.”
Matt Smith from the Viral Factory presented the fact that over 70% of all internet content is about cats. The idea I guess was that when people like something, it will spread, like icanhazcheezburger. This was his closing image: 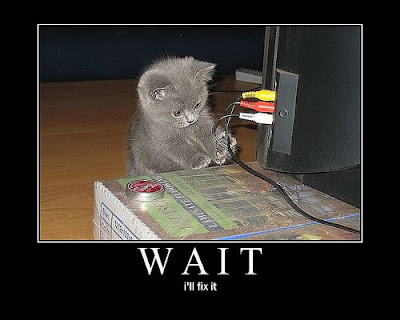 To close the night was David Michel-Davies from the Webbies, who spoke about stuff he likes on the internet – Kiva, David Bowie, gay robot, NASA and Eyes on Darfur. He ended by inviting everyone to Internet Week New York in June next year, so if you’re around there, it looks like it may be a fun event.
I’m really glad I went!

3 thoughts on “The Webbies at the ICA”